I like stations. Train, subway, bus. Airports as well, although I sometimes wonder why they are not called airstations. Are we not able to think that big?
I like them because they are the essence of transit. Of being neither here nor there. Notwithstanding their name, there is nothing stationary about them.
I have been in transit in a lot of stations and they each attract me for their own reasons. The old Moscow stations with their fabulous murals, Paris because it was my first Metro experience, Tokyo because of its size – rush hour sees the population of a medium sized country on the move, New York has Grand Central.

Earlier this week I found myself in Korea photographing some shamanistic rituals in the port town of Incheon. I stayed in Seoul and took the subway to reach my destination. One station along the route always brought a smile to my face. Not because of its decoration, its design or other visual treat. No, my affinity to this station was entirely auditory.

Seoul Station. Who wouldn’t want to go there? 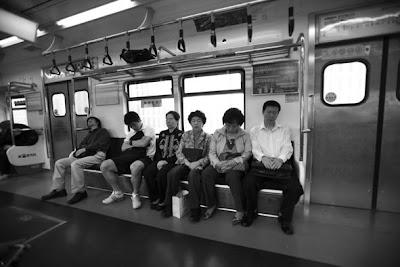 Many people don’t like the transit experience, they’d rather be home, failing to understand that being home is being in transit on a different level. On the other hand the two elderly gentlemen in the final photo seem to get it: life is transitory on every level, you may as well pass through it with some Soul.

P.S. Sometimes reality needs a little help to get in the right mood.
Posted by Hans Kemp at 10:31 AM